The watch's movement is the mechanism it uses to keep time, which can be broken down into two main groups: Quartz and Mechanical.

Mechanical movement requires winding to power itself, and is less accurate than quartz but does not require batteries. A spring is wound up by hand, which then unwinds itself in a controlled manner to move the watch’s gears in regular intervals.

The timing function in a Quartz watch relies on the mineral’s unique vibrational quality – when an electric current passes through, it oscillates at a precise frequency. A circuit counts the vibrations and sends an electric pulse at regular intervals to move the gears (exactly 32768 vibrations are equal to one second). A quartz watch is extremely accurate, but requires a power source.

Automatic movement is essentially a mechanism that features an eccentric weight (winding rotor) that utilizes the wearer’s natural wrist movement to keep the mainspring tense in a mechanical watch, or charge a battery in a quartz watch. This eliminates the need for regular winding or battery changes.

The crystal is the clear material enclosing the watch dial, fixed to the case underneath the bezel. It can also be referred to as the dial window or glass. The most common materials used are acrylic, glass, and synthetic sapphire. With clarity and scratch resistance being the most desirable qualities for a watch crystal, synthetic sapphire is the best option – it's transparent to wavelengths of light well beyond what our eyes can discern, and has a value of 9 on the Mohs hardness scale (one below diamond).

The watch case accounts for most of the visible surface of the watch, aside from the band. For this reason, the material should be both strong and aesthetically pleasing. Stainless steel is the most common material used for a case, as it’s resistant to dents and scratches and has a smooth, shiny surface (when polished). Most often, when precious metals are used to create a watch case, they're plated over stainless steel.

The backing of the watch goes unseen for the most part, and is often appreciated as such. For this reason Screw-in and Pressure Fit backs are preferred to backs with exposed screws. Manufacturers suggest taking your watch to a professional for servicing, but for battery changes it does help to know which type of backing you have as removing it can be tricky – this information will be provided in the instructions provided.

The information displayed on the dial is collectively referred to as the Markers, and can sometimes be referred to by the terminology in the graphic above. Make note of it if you’re going for a specific style.

The hour and minute hands on the watch also vary in style, and for the most discerning customers the names of the hands may come in handy while searching for the perfect time piece.

Dial colors and materials vary and can greatly affect the overall appeal of a watch, with manufacturers often making the same model with different colored dials to suit your personal taste. Mother-of-Pearl is one of the more common dial materials found, enjoyed for its subtle rainbow light refractions. High end watches with precious metal cases will often fashion the dial from the same material.

The bezel is the rim that runs around the face of the watch fixing the crystal to the case. It can also serve a multitude of functions: a Slide-Rule bezel is usually marked with mathematical rules that allow the wearer to perform navigational and other calculations, a Tachymeter allows you to calculate your speed based on travel time over a fixed distance, and a Unidirectional bezel is usually used by divers to keep track of elapsed time underwater. A fixed bezel is often opted for by wearers for its simplicity, compared to the busier appearance of functional bezels. Some manufacturers offer Interchangeable bezels that allow you to change the appearance and function whenever needed

The band is an important consideration when buying a watch, as aesthetics, function, and comfort should all be taken into account. It can be divided into two main categories: Straps and Bracelets. Bracelets are essentially bands fashioned from metals (often the very same as the case). Bracelets are naturally heavier than straps, but provide a coherent appearance matching the case material. Straps are much more varied in their material and appearance options, the most common being leathers of all sorts (alligator, ostrich, calfhide, etc). Sport and diver’s watches often utilize manmade materials such as nylon/acrylics and even rubber, as they are durable and won’t degrade after being exposed to sweat and harsh weather. The right combination between a watch and a strap material is a careful consideration that every manufacturer takes into account, but is still entirely subjective. The options are endless.

The lugs are simply the protrusions from the top and bottom of the case that the band attaches to. It is important to know their location when shopping for an alternate or replacement band for your watch, since the measurement of space between the two lugs will determine the width you’re looking for.

The clasp, while usually hidden on the inside of the wrist, holds it all together. A Buckle clasp is the most common, not unlike what you’d find on a belt. The bangle bracelet is distinct in that it has two or more very large curved links that form the bracelet instead of many small links. These larger links are known as bangles. The image to the left illustrates the two larger curved links with the smaller links attaching to a Jeweler's Clasp The Box with Tongue Clasp is explained very well with the picture to the left. There is a basic locking mechanism on this clasp but it may wear out quite easily thus making the watch difficult to keep on. Box with Tongue and Safety Clasp :

This is the same as the Box with Tongue Clasp except it provides additional security through the locking bar that swings tightly onto the locking post. This clasp is found frequently on 14k gold watches like the Bulova 14k gold Like a leather belt buckle, this traditional clasp is found on many leather and other non-metal straps. The Deployment Buckle or Invisible Double-Locking Clasp is also known as the Hidden Deployment Buckle or Butterfly Clasp, because, when closed, the clasp is essentially invisible and it opens symmetrically like a butterfly. This is perhaps one of the most common clasps available and most preferred by customers because the clasp is not a distraction from the watch itself. The clasp is opened by pulling the joined ends of the bracelet away from the wrist. These clasps also come on some of the leather and other non-metal strapped watches. The Deployment Buckle with Push-Button is essentially the same as the Deployment Buckle in looks and function except that its locking mechanism is released by two small buttons on each side of the bracelet. It is advantageous because the locking mechanism cannot be released by pressure on the bracelet, but only by pushing the buttons. This reduces the likelihood that the watch will release the without the wearer knowing it. These clasps also come on some of the leather and other non-metal strapped watches. The Expansion Bracelet or Band is designed to expand or stretch over the wearer's wrist and then contract snuggly on the wrist when released. The Fold Over Clasp collapses on itself and locks via a pressure tab. The clasp typically has several micro adjustment holes (as seen in the image) that can be used to adjust the bracelet size by non-jewelers. In time, the pressure tab often wears out and the clasp no longer stays closed. This has led to the following three different improvements on the Fold Over concept. Fold Over Clasp with Safety :

This is the first of three improvements on the Fold Over Clasp. The Fold Over Safety Clasp provides a flap that folds over the closed end of the clasp which makes the clasp more difficult to open unintentionally. Fold Over Clasp with Push Button : Fold Over Clasp with Safety and Push Button or Double Locking Fold-Over Clasp :

TThis is the third of three improvements on the Fold Over Clasp. This clasp combines the flap of the safety clasp with a push button lock to provide the wearer the maximum security available for any Fold Over Clasp. A jewelry clasp is the simplest of all clasps. It is a latch that snaps closed around a bar. It is released by gently lifting the clasp and unsnapping it from the latch bar. This clasp is almost exclusively available on ladies dress watches. This is essentially the same as the Jewelry Clasp, but with a lock that is released by a push button. This provides added security for the wearer. As described, the Lobster Claw pr Hook Buckle Clasp looks like a lobster's claw. These are typically on chain bracelets where the claw clamps to the last link on the opposite side. As shown to the left, the Toggle Clasp puts a relatively large bar through a smaller ring closure on the other side of the bracelet. These are typically on chain bracelets or costume bracelets and are seldom used on watches.

Helium valves do nothing to actually seal the watch and make it more waterproof than another, but their function allows for atmospheric pressure to be adjusted safely as depth changes, thus preventing the case or dial window from exploding (particularly when surfacing, as pressure changes are dramatic).

Watches are NOT suitable for hot baths, saunas, heavily chlorinated water, perfume or hairspray – the gaskets can degrade, as they are not necessarily designed to resist heat and harsh chemicals.

Warranty information will be provided to you by the manufacturer, and often includes a period of time the piece can be returned for refund. As a general rule of thumb, manufacturers do not recommend servicing your own watch and will provide specific instructions for care and general maintenance. In most cases, a piece that has been serviced by anyone other than a professional will have its warranty voided. 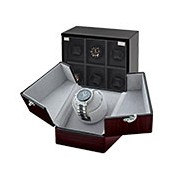 Jewelry Buying Guide Read More
We Sparkle In the PressCheck out our braggin' rights.