June Birthstone: Pearl Jewelry, Its Meaning and What It Symbolizes 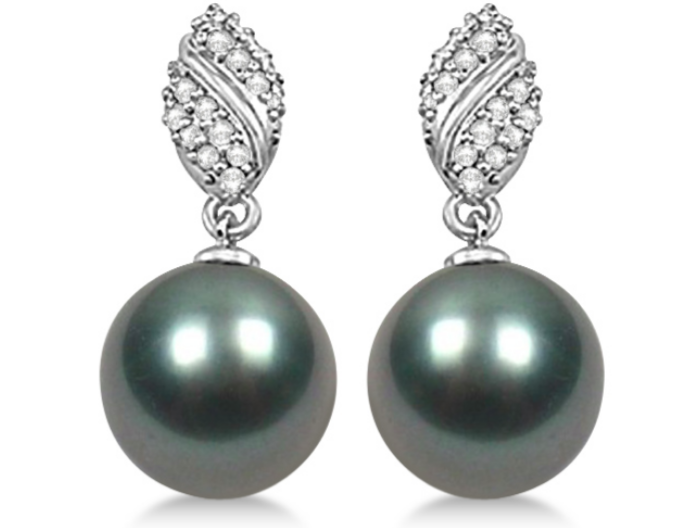 The month of June is the month of pearls, and we have everything you need to know about the beloved gem, which is also the gem of the third and thirtieth anniversaries. The gem also has an interested history (that stems back to 2206 BC) and symbolism to it.

Pearls, both natural and cultured, are one of the most popular gems in the world. They come in a wide variety of colors, with the most popular and familiar being white and cream. Other colors include black, gray, yellow, orange, pink, lavender, green and blue, but the range of pearl colors extends to every hue really. While gemstones, like diamonds and rubies, form as minerals underground, within the earth, pearls are organic, forming within various species of freshwater and saltwater mollusks. The Gemological Institute of America (GIA) explained that natural pearls form in the bodies of certain mollusks and without any human help while cultured pearls are the result of human involvement and the artificial insertion of a bead or piece of mantle tissue into the mollusk, which gets the process started. The species secrete a substance called nacre, which consists of calcium carbonate and protein. This nacre, as time goes on, grows layer by layer into a pearl.

These pearl-producing mollusks can live and grow in both cold and warm water oceans, as well as in rivers in almost every continent, according to the International Gem Society.

Natural pearls can be identified different from cultured pearls by taking X-rays to reveal their inner structures, according to GIA. Cultured pearls range from 2-16mm in diameter, which depends on the mollusk used, and there are four types of cultured whole pearls: Akoya, South Sea, Tahitian and Freshwater.

Natural pearls have been found in many species of freshwater mollusk in North America’s lakes and rivers, according to GIA, and they are most abundant within the Mississippi River drainage basin.

The first written mention of a natural pearl was by a Chinese historian, who wrote about them in 2206 BC. The first attempts to culture pearls took place hundreds of years ago in China, but a Japanese man named Kokichi Mikimoto successfully cultured the first pearl in Japan in 1893. Mikimoto became famous and credited with creating the first cultured pearl, and started the cultured pearl industry with the establishment of his luxury pearl company, Mikimoto, which is still around today.

In 1917, Pierre Cartier traded a double strand of natural pearls for a mansion on Fifth Avenue in New York City.

The International Gem Society (IGS) lists on their website some areas where pearls are typically found. Currently, Japan is the primary source for cultured pearls and they are usually white. The north and west coasts of Australia produce silvery white to yellow pearls and in the Gulf of Manaar, located between Sri Lanka and India, there are traditionally pale, creamy white pearls. Mexico and Panama used to be major sources for pearls, up until the 20th century. Today they produce Tahitian type, cultured pearls.

The Persian Gulf has been harvested pearls for over 2,000 years with the most productive areas being along the coasts of Oman, Iran and Saudi Arabia. Pearls from this area are creamy white. The Red Sea used to be famous for providing pearls that were whiter than most, but this area is not producing pearls today. 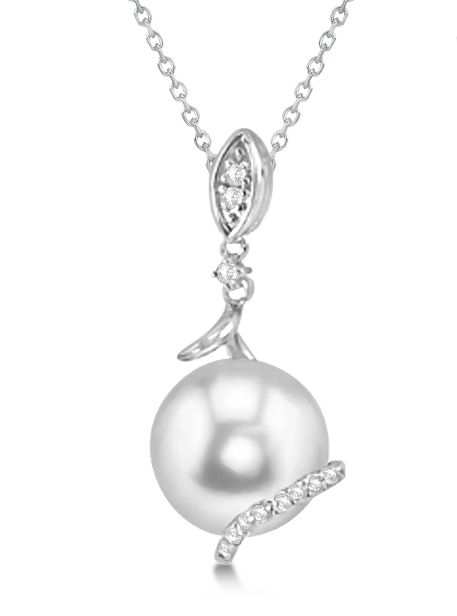 Natural pearls have been symbols of wealth and status, and they’ve been treasured by members of royal families as well as wealthy citizens all around the world. GIA noted that during Christopher Columbus’s third and fourth voyages to the New World, in 1498 and 1502 respectively, he many times met native people adorned with natural pearls. When he discovered natural pearl sources in the waters of what is now considered Venezuela and Panama, it intensified demand in Europe for the stone. These same natural pearl sources had since declined due to overfishing, pearl culturing, plastic buttons and oil drilling.

In ancient China, pearls were believed to guarantee protection from fire and fire-breathing dragons. In Europe, they symbolized modesty, chastity, and purity. According to the IGS, many cultures make lunar connections with pearls that are further reinforced by the Moon’s association with the water, where pearls are born. Among Western cultures, the pearl is astrologically associated with the planet Venus, according to IGS and like pearls, the goddess of love hails from the sea. Some also believe that pearls are tears shed by the gods and another legend claims that the tears Eve cried when she was banished from the Garden of Eden turned into pearls.

IGS noted that the Chinese love golden pearls because they believe it brings prosperity and luck. In fact, Chinese artwork often includes dragons holding golden pearls in their mouths or claws.

IGS also claims there is a myth about pearls being unlucky, but most of the superstitions surrounding their unluckiness go back to the ideal of their purity. According to the organization, “Any pearl jewelry with malice or jealousy in its past builds a reputation for bringing bad luck to those sharing the same traits. If given in love with a pure heart, a pearl always symbolizes purity, fertility, and the cycles of life.” 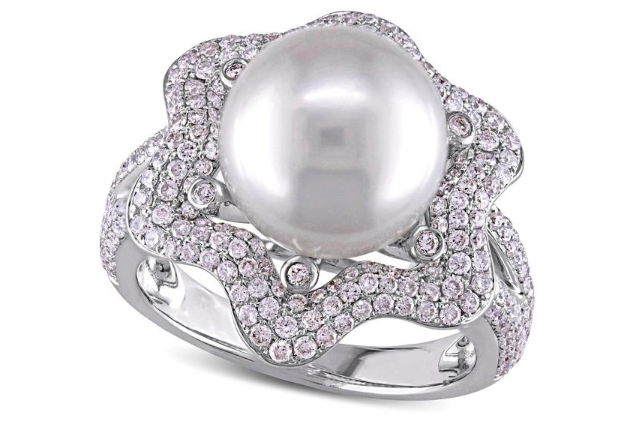 “Are pearls the new diamonds?” Vogue magazine asked in an article published on June 19. It remains unclear, but cultured pearls are popular for bead necklaces and bracelets, or mounted in solitaires, pairs, or clusters for use in earrings, rings, and pendants.

More interested in a natural pearl? Well make sure you ready to write a hefty check because natural pearls are extremely rare nowadays. Most pearls today have been harvested, although you may be able to purchase small, natural pearls, for a very high price.

Pearl engagement rings are popular among some folks, but the only problem is that pearls are made from calcium carbonate, which means that at 2.5 to 3.0 on the Mohs scale, they will scratch and tarnish easily. One suggestion is to select a pearl engagement ring only if you plan to wear it occasionally. Or if you choose smaller pearls, surround it by hardier gemstones.

Pearls are also a popular gift for brides, and has been a big part of many royal weddings and royal jewelry. Many Western cultures commonly associate the color white (of both the pearl and the wedding dress) with innocence and purity. Brides in Asia also wear pearl necklaces as symbols of fertility, according to the International Gem Society.

All fashion icons loved pearls. “A woman needs ropes and ropes of pearls,” said Coco Chanel, while the late Grace Kelly, princess of Monaco, noted, “I favor pearls on screen and in my private life.”  Elizabeth Taylor and Audrey Hepburn were often spotted wearing pearls and had pearl jewelry, and who can forget the show-stopping pearl ensemble Hepburn wore in the movie Breakfast at Tiffany’s. First Lady Jackie Kennedy once said “pearls are always appropriate” and fellow First Lady Barbara Bush also loved wearing pearls

Dorothy Parker once said, “When I’m cold I just put another rope of pearls on” and Elizabeth Taylor even published a book titled “My Love Affair With Jewelry.” Meghan Markle, Prince Harry’s new wife, is also a fan of pearls. In early June she wore a pair of pearl earrings that were a gift from Queen Elizabeth, confirmed by Buckingham Palace. It’s unclear where the pearls are from exactly, but some speculate that the earrings are from the Queen’s personal collection.

A set of natural pearls that once belonged to the famous French queen Marie Antoinette, which have not been seen in public for 200 years, are being auctioned by Sotheby in November, they announced in June. The sale is set to take place in Geneva on Nov. 12. The auction house said pearls were prized as diamonds in the late 18th century and Marie Antoinette, who was guillotined during the French Revolution, was often portrayed wearing pearls. The collection includes one piece that has a diamond pendant and natural pearl that is estimated at $2 million.

Pearls have also had an effect on the arts. The most famous example is the 1665 painting by Johannes Vermeer titled “Girl with a Pearl Earring, which inspired a novel, a play, and a film, in which Scarlett Johansson played the main character.

When it comes to pearls, round is the most difficult shape to culture, according to GIA. It is the rarest cultured pearl shape and  generally the most valuable, with some exceptions. For example, a well-formed pear, oval, or baroque (irregularly shaped) cultured pearls are also highly sought after.

Luster is what gives a natural or cultured pearl its uniqueness. If a pearl’s luster is excellent, then reflections appear bright and sharp. If its poor, reflections are “dim and diffused,” GIA noted. The higher the luster, the higher the worth value of the pearl. Typically, thicker nacre produced by the mollusk makes a pearl look more lustrous. The general rule of thumb is to never buy a pearl that appears dull or chalky. IGS noted that pearls can also exhibit something called orient, which is an iridescent display of rainbow colors. Orient generally makes a pearl more valuable (meaning also more expensive).

Watch the video below to see how the Gemological Institute of America evaluates the luster of pearls.