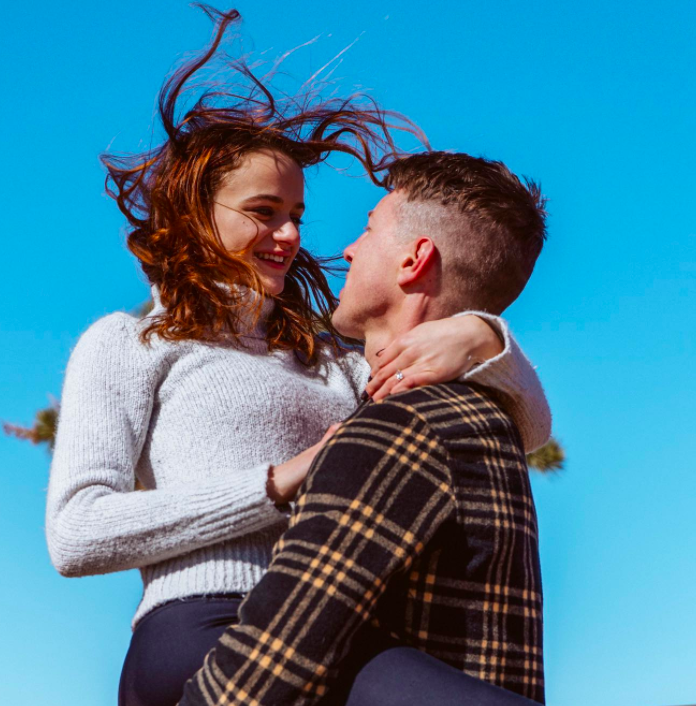 The “Kissing Booth” star Joey King announced her engagement earlier this month to boyfriend, producer and director Steven Piet, after almost two and a half years of dating and we can’t get enough of her cool diamond engagement ring.

Piet, 30, proposed to the actress, 22, on Feb. 2 with an elongated diamond — often referred to as “moval” since it takes its unique style from both marquise and oval cuts — set horizontally on a gold design, Page Six reported. The engagement ring also features a larger epaulette cut diamond and baguette diamonds with darker side stones. A similar horizontal design is selling online from the designer who made King’s ring for $30,000.

“This design is especially modern and edgy and one of the most creative concepts you will see,” jewelry designer Mark Broumand told Page Six Style, while also estimating that the engagement ring is worth around $120,000.

Jewelry expert Apeksha Kothari agrees by telling the publication, “The cut of the diamond and the ring design is very unique; it is one-of-a-kind and an artisan cut.”

“As for the design, the diamond is set east to west rather than the traditional north to south, and the design evokes traditions from the Art Deco era,” she continued, adding that because of the design’s uniqueness it could be worth up to $150,000. “It is an antique-inspired ring with a modern flair.”

King and Piet met in 2019 on the set of her Hulu miniseries “The Act”in which she played the real-life Gypsy Rose Blanchard. Piet was a producer and director on the project and the couple reportedly began dating after meeting on set.

King posted a series of photos from the proposal on Instagram and wrote in the caption, “I never knew happiness could be so powerful that it can take the air from your lungs, overwhelming every part of you that you can’t help but feel your eyes well from the undeniable joy. I never knew that a persons presence and heart could feel like a real home. I never knew love could be so unquestionably beautiful. I never knew until you.”

“The date was 2/2/22 when you asked me to marry you and made me the luckiest lady alive,” she continued. “I love you more than an Instagram caption could ever do justice. Hanging out with you forever sounds like a real dream, so let’s do it.”

On his own Instagram page, Piet wrote, “The weather was less than perfect. Cold. Windy. Perfectly imperfect to ask my best friend to spend a lifetime together. A lifetime of incredibly safe and vulnerable conversations. Holding hands on silent cab rides home, exhausted from great food and red wine. And oh, the laughter. The uncontrollable laughter.”

He added, “You’ve unlocked a dimension of love in me that I never knew existed.”

King previously dated her “Kissing Booth” costar Jacob Elordi before they broke up in 2018. She then said in 2020 that she would never date another actor again. “No. I couldn’t. I think that it’s awesome to date someone in your field, who gets it, but doing the same exact thing as somebody is tough. It’s really tough,” she said on SiriusXM’s Howard Stern Show.