Congrats to actress Lily Collins and writer-director Charlie McDowell on their engagement!

Collins, the star of the new TV series “Emily in Paris,” shared the news on her Instagram page on September 25 by posting a series of photos capturing the sweet proposal, which took place outdoors during their road trip to New Mexico, where they were surrounded by greenery and mountains. “I’ve been waiting my lifetime for you and I can’t wait to spend our lifetime together,” the 31-year-old, who is the daughter of music legend Phil Collins, wrote in the Instagram caption. “The purest joy I’ve ever felt.”

McDowell — who is the son of actress Mary Steenburgen and actor Malcolm McDowell — posted about their engagement on his own Instagram page. The 37-year-old wrote, “In a time of uncertainty and darkness you have illuminated my life. I will forever cherish my adventure with you.”

The couple have been dating for over a year and began sharing photos of each other on Instagram in August 2019. The “To the Bone” actress made the relationship Instagram official when she shared a few photos of her and McDowell in Paris, France. The director was previously romantically linked to “Game of Thrones” star Emilia Clarke and “Girl With the Dragon Tattoo” lead actress Rooney Mara.

In one of the photos that she posted online, Collins gave her fans a close up look at her unique and very chic engagement ring.

Instead of a classic solitaire diamond, which is probably today’s most popular engagement ring style, her ring includes a pink-hued “one-of-a-kind rose-cut diamond” with a bezel setting and thin gold band, as reported by People.

In the comments section of the post, McDowell— who has directed episodes for series such as “Dear White People,” “Legion,” and “Silicon Valley” — thanked the ring designer for the yellow gold engagement ring, writing, “Thank you from the bottom of my heart SO much for the most stunning, perfect ring. It’s breathtaking.” In the comments section Collins also thanked the jewelry designer for “the most stunning, perfect ring” that she also referred to as “breathtaking.” 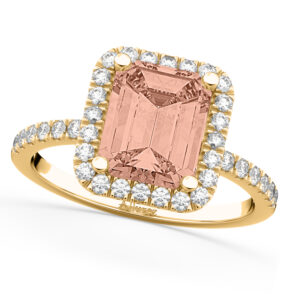 McDowell, whose credits include “The One I Love” and the 2017 Netflix romantic sci-fi film “The Discovery,” is also an author. In 2013, Three Rivers Press published his book “Dear Girls Above Me,” based on his popular Twitter feed.

Collins is not the first celebrity to have an unconventional engagement ring and some of our favorites include actress Emma Stone’s pearl engagement ring that features an eight-millimeter Akoya untreated pearl at its center, surrounded by 0.37 carats of supporting diamonds along the band and around the pearl. The ring’s band is 18-karat beige gold band.

Another favorite is gemstone engagement rings, and specifically the one singer Katy Perry got from actor Orlando Bloom. The couple announced their engagement on Valentine’s Day in an Instagram post, in which the “Daisies” singer showed off her flower-shaped engagement ring that features a center pink diamond.

Last by not least is one of the most popular engagement ring trends of 2020, which is to have two diamond center stones, usually in two different cuts. The most popular ring of this style belongs to model Emily Ratajkowski.