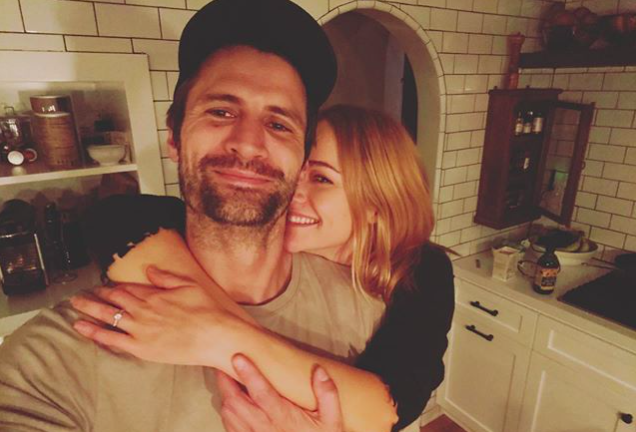 Lafferty, 35, announced that he proposed to the Australian actress, 31, on Sunday.

“She said yeah,” Lafferty shared on Instagram, alongside a sweet selfie of the couple in which Park wraps her arms around her new fiance while showing off her new diamond engagement ring. Not much is known about the simple but elegant engagement ring, but based on the photo Lafferty chose a round diamond and the band appears to be yellow gold.

While Park didn’t post about her engagement, she did share a photo from Palm Springs, California, where the proposal seems to have taken place.

Lafferty is best known for his role as basketball star Nathan Scott on the hit CW teen drama “One Tree Hill” from 2003 to 2012. Park most recently starred as Princess Eleanor“Len” Henstridge on “The Royals” from 2015 to 2018. The drama is about a fictionalized version of Britain’s royal family and was created by One Tree Hill showrunner Mark Schwahn.

The couple, who has been very private about their relationship over the years, live together in Los Angeles. They have been together since at least 2018 when Park posted a photo with Lafferty and his One Tree Hill costar Stephen Colletti, according to People. Lafferty and Park reportedly first met in 2015 when he directed an episode on season 2 of her E! show, according to Us Weekly. Lafferty returned to director some episodes in season 3. Park first found fame playing Claudia Hammond in the Australian soap “Home & Away” before finding success in the US. Lafferty previously dated his “One Tree Hill” co-star Sophia Bush.

Lafferty and Park join a string of celebrity couples that have gotten engaged recently.

Among the most recent is former Bachelorette star Kenny King, who proposed to his girlfriend London Ferris over the weekend. King posted a video of the proposal on Instagram. The clip shows the couple riding on the back of a boat when the pro wrestler leans over and pretends to be sick. When Ferris walks over to try and comfort him, King gets down on one knee. She then drops down and hugs her new fiancé.

“Perfect time, perfect place, perfect person,” he wrote. “She said yes! (she would have had to swim if she didn’t).”

Kenny has a daughter from a previous relationship. Ferris, a US Air Force veteran, works as a hair and makeup artist and is also a mother. She shared a photo taken after the proposal that shows a close-up of her new ring.

The summer of 2020 was also busy one when it came to celebrity engagements.Singer Demi Lovato announced her engagement to “The Young and the Restless” actor Max Ehrich, 29, in August after dating for only five months. Ehrich, 29, proposed to the “Sober” on a beach in Malibu with an emerald-cut diamond engagement ring, which looks to be set in platinum with the center stone flanked by two trapezoid accent diamonds. The center diamond is estimated to be between seven and 10 carats, and could have cost as much as millions.

The Bachelorette star Clare Crawley got engaged to contestant Dale Moss. Their engagement followed news the Crawley quit filming the show after 12 days of filming because she had “already fallen in love” with the 31-year-old. Clare was then replaced by Tayshia Adams as the next bachelorette.

Former One Direction singer Liam Payne also got engaged to his girlfriend of two years, Texas model and millionaire heiress Maya Henry. According to the MailOnline, Payne, 26, proposed with a £3 million ($3.5 million) diamond ring. The proposal reportedly took place during the coronavirus lockdown. Payne has a 3-year-old son with his former girlfriend, British singer Cheryl. He reportedly first met Henry, the daughter of millionaire Texan lawyer Thomas J. Henry, at a meet-and-greet event in 2015 when she was a 15-year-old One Direction fan. The couple went public with their relationship in September 2019.