Latest Celebrity Engagement Rings and Similar Ones for You 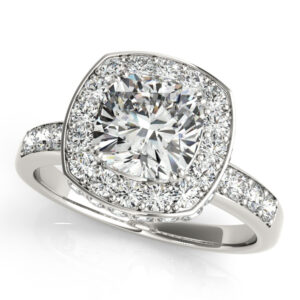 It’s only the second month of 2019 and already a number of celebrity couples have gotten engaged! Stars including Jennifer Lawrence and Katherine Schwarzenegger are preparing to walk down the aisle and we got the scope on their engagement rings and similar styles that you can get for yourself or your loved one.

Scroll down to see who popped the question so far this year and details about their proposal.

The American author, and daughter of actor and politician Arnold Schwarzenegger, got engaged to Guardians of the Galaxy star Chris Pratt in January and in early February she showed off her engagement ring in an Instagram post. Schwarzenegger’s ring includes an oval center stone, which appears to be set on a very thin solitaire band.

The couple were set up by Schwarzenegger’s mom, Maria Shriver, and their engagement comes a year and a half after Pratt announced his separation from Anna Faris in August 2017 after almost nine years of marriage. Pratt and Faris have a 6-year-old son named Jack.

Stones with elongated shapes like marquise, oval, and pear-cut diamonds “often look larger than round diamonds of a similar carat weight,” runway stylist and jewelry expert Tanya Dukes recently told INSIDER when talking about engagement ring trends for 2019. Model Hailey Baldwin also got engaged with an oval-shaped ring, when singer Justin Bieber proposed, and Dukes said that recently married celebrities, like Baldwin, have “put the spotlight on the wide range of diamonds available beyond the traditional round shape.”

She added that any type of cut that is not round like oval engagement rings, such as the one shown below, “has an eye-catching, glamorous look that feels a little unexpected,” Dukes said. 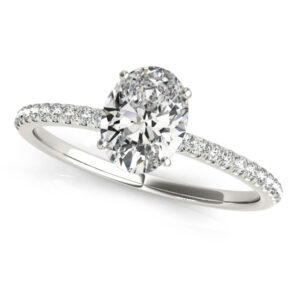 The actress and her fiancé, an art gallery director from New York, got engaged in February and as they left a restaurant in New York recently, photographers were able to catch a snap of the actress wearing a small diamond ring on her left ring finger. The photos clearly reveal a little diamond on a thin, delicate band sitting on her finger, however, when Page Six first reported Maroney and Lawrence’s engagement, sources described her bling as a “massive ring” and “giant rock.”

We’re still not sure the truth behind Lawrence’s ring, but taking her personal style into account we expect it to be simple and not too flashy or over-the-top. We’re guessing a classic round diamond but maybe with a cool band, like the one below. 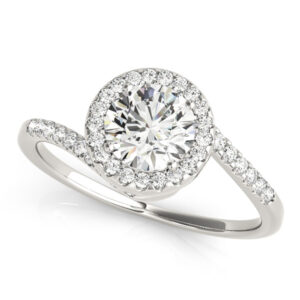 Ok so they got married technically in 2018, but it was close to the new year! The Australian actor and American singer got married last December in a low-key ceremony at the Cyrus’ house in Nashville, Tennessee, where only a group of the couple’s closest family members and friends were in attendance. Cyrus’ ring is a 19th-century cushion-cut stone that sits on a gold band with an Art Nouveau design, covered in “with tiny little swirls and diamond details within a floral pattern,” according to its designer.

Art Nouveau is an ornamental style of art that flourished between about 1890 and 1910 throughout Europe and the United States. If you want a similar engagement ring for you or your partner try a vintage-inspired ring that has floral designs, like the one below. There are so many antique style engagement rings to choose from.

Dukes told INSIDER that engagement rings with multiple stones are popular and one engagement ring trend for 2019. She added that couples can also “get really creative by mixing diamonds of different shapes and sizes.” 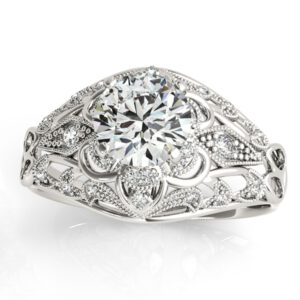 The former NFL quarterback popped the question to the 2017 Miss Universe in early January after nearly six months of dating with a 7.25-carat round solitaire diamond engagement ring. The couple shared pictures of the ring on their separate Instagram pages and continued the festivities into Friday with a trip to Walt Disney World.

Designer Jade Trau told Entertainment Tonight that standout solitaire engagement rings, like the one below, are very big in 2019. Trau said, “It’s all about the solitaire with an edge. The diamond is the focus this year in my opinion, whether it’s a colored one, an opaque one or a spectacular looking white one in a killer setting, accentuating the stone itself.” 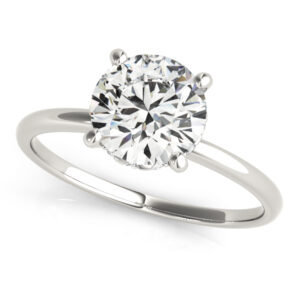 The original Hamilton cast members announced their engagement all the way from Europe! The actor revealed that he is getting married to his Broadway costar on Instagram on January 4 with a photo of her showing off her new engagement ring in front of the Eiffel Tower in Paris. The couple have been dating since they debuted as part of the original cast of Hamilton. Cephas’ emerald cut engagement ring is set on a platinum band and has a three-stone setting. 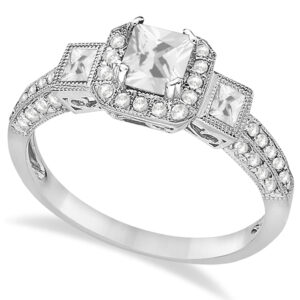 The Bachelorette alum, who appeared on Kaitlyn Bristowe’s season 11 of the franchise and season two of Bachelor in Paradise, proposed to Hughes, a former NFL cheerleader for the Kansas City Chiefs, in Hawaii in late January. She shared a picture of the ring on Instagram and its a round cut diamond sitting on a gold band. Round engagement rings are the most popular kind of engagement rings and Dukes told INSIDER about the yellow gold band, “For more than a decade, white metals — primarily platinum and white gold — dominated, but yellow gold has surged in popularity.” 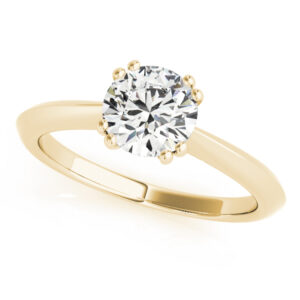