Why Emerald Cut Engagement Rings Are So Popular, Especially Among Celebrities 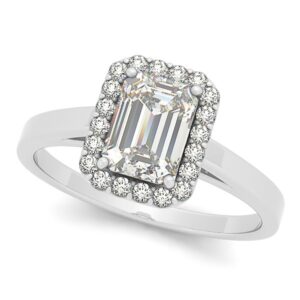 “It’s definitely a beautiful stone, definitely one of our best-selling stones,” said Raphi Mahgerefteh, diamond expert and CEO of Allurez. “I think why it’s so popular among celebrities is the elongated shape. It just has a lot of higher brilliance and a lot of beauty.”

An emerald cut’s unique shape and angles capture a diamond’s clarity and helps it catch the light, and its rectangular shape means it follows the length of the finger and not the width, which means you can go wild with the number of carats. Also because its rectangular, a 3-carat emerald cut will look larger than for example a 3-carat round stone. So it might be the best choice for brides wanting more for their money.

The most talked about emerald-cut diamond engagement ring now is the one former MLB star and New York Yankee Alex Rodriguez gave singer and actress Jennifer Lopez when he proposed in early March. Lopez’s stunning and massive emerald-cut ring takes up the entire upper region of her finger and although no details have been released officially about the rock, a number of jewelry experts have estimated it to cost between $1 million and $5 million and be between 12 and 15, or 20 carats.

“The emerald-cut ring is widely known as the most elegant and classic cut of diamond,” one jewelry expert told People magazine. “Jennifer’s is featured on a classic solitaire band which perfectly showcases its timeless, elongated cut.”

“Since Jennifer Lopez got engaged we are seeing more emerald cuts,” Mahgerefteh said, adding that the emerald cut is one of Allurez’s top three best-selling stones, behind round and cushion cut.

Mahgerefteh also noted that over the past five years oval engagement rings have been more popular, until now. It makes sense since the two cuts have similar characteristics. He explained, “The elongated shape does make it appear bigger than something like a princess cut which is just a square shape, and I think that’s one of the reasons that people were going for oval. Compared to a round the oval looks bigger because of the elongated shape and it’s the same thing with emerald cut.”

Earlier this year, another famous Jennifer, actress Jennifer Lawrence, got engaged to Crooke Mulroney also with an emerald-cut engagement ring. Beyoncé, Amal Clooney, Angelina Jolie and Mariah Carey and Elizabeth Taylor (who wore a 33-carat emerald cut diamond, a gift from her lifelong love Richard Burton) are among some of the celebrity brides to rock this specific cut and even royalty has been a fan of this cut: Princess Grace Kelly wore a 10-carat emerald cut engagement ring from Cartier given to her by Prince Ranier. 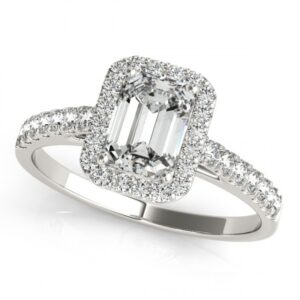 “The selection of an emerald cut says a lot about the wearer,” jewelry expert Greg Kwiat told Town & Country magazine. “It’s for a woman who wants something that is different yet classic at the same time. The emerald cut has a regal style, and projects a high degree of confidence. Because emerald cuts are not faceted to be as ‘sparkly’ as round diamonds and other shapes, it often appeals to a self-assured woman who celebrates understated elegance. Without trying too hard, it simply says everything.”

“They are perceived by some as clearer, purer, and more personally individual than traditional round-shaped, brilliant-cut diamonds,” jewelry expert Jim Haag also told the magazine about emerald cut engagement rings and its popularity. “Because of their more simple faceting arrangement on top, they allow the wearer a clear look into the ‘soul’ of the diamond, and choose a stone completely unique to the wearer.”

Haag added that cut can be tailored to both the diamond and the preference of the wearer or buyer. 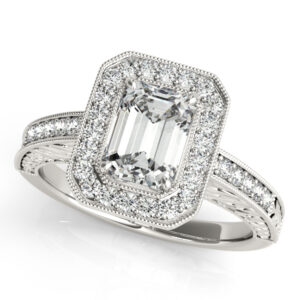 “Emerald cuts are considered by some to be a bit more unique than traditional round brilliant cut diamonds as they come in an endless array of shapes and cuts to suit different personalities and tastes,” said Haag. “They can be ‘swimming pool/tennis court’ shaped—more rectangular—or squarish, each with its unique faceting arrangement. Conversely, round brilliant cuts are all cut to similar proportions and do not have these types of variations.

“Acquiring an emerald cut diamond takes a good deal of investigating into the various shapes and cuts. Square and rectangular shapes vary in their appropriateness depending upon how elongated women’s fingers appear to be. —what a person likes in a picture might not look right on a woman’s hand.”