Royal Wedding Jewelry: What Meghan Markle and Other Princesses Wore on Their Big Day

Meghan Markle had a very specific style – she often chooses dainty jewelry, stackable rings and yellow gold – and she wanted the same style for her wedding on May 19 at Windsor Castle: simple and elegant. Her bouquet was made of flowers picked at the royal palace, she wore minimal makeup and even her wedding gown had a minimalistic look to it.

Her Royal Highness, the Duchess of Sussex was also very specific about her wedding jewelry.

Markle wore on her wedding day a pair of diamond stud earrings from the French jeweler Cartier and The Queen Mary Tiara, which held her veil in place, Marie Claire reported. The silver jewelry was a change from Markle’s usual preference of gold, but she looked stunning nonetheless. According to a statement released by Kensington Palace, the diamond and platinum tiara was made in 1932, and formed as a flexible band of 11 sections, pierced with interlaced ovals and pavé set with large and small brilliant diamonds. The center was set with a detachable brooch of ten brilliant diamonds. 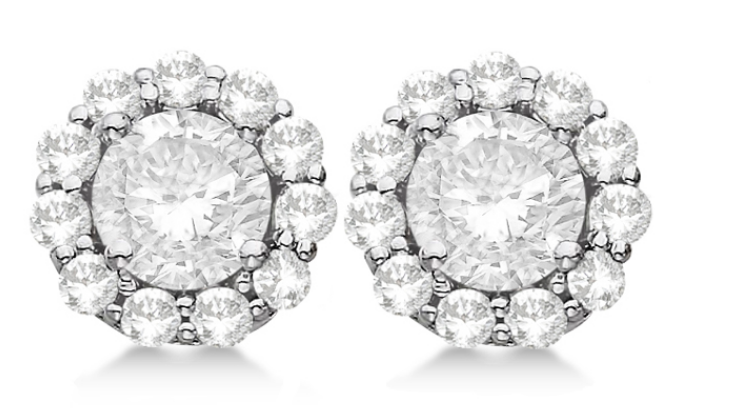 Diamond stud earrings by Allurez similar to the ones Markle wore.

Queen Mary, wife of King George V, bought the diamond tiara from luxury London jeweler Garrard in 1932. After her death, the tiara was inherited by her daughter-in-law, Princess Marina, Duchess of Kent. Queen Elizabeth’s sister, Princess Margaret, has also worn the tiara.

Meghan wore no necklace to her wedding, perhaps because she was worried that it would have distracted from her boatneck-style, off-the-shoulder Givenchy wedding gown.

Markle’s wedding band, of course also wore at the wedding, is made of Welsh gold and was crafted from a piece of gold given to her by the Queen herself, as a gift. Wearing a Welsh gold wedding band is a tradition passed down through several generations of British royalty, according to Marie Claire. The Queen Mother, Queen Elizabeth II, Princess Margaret (the Queen’s sister), Princess Anne (the Queen’s daughter), Princess Diana, and Kate Middleton all had Welsh gold wedding rings.

Royal correspondent Rebecca English reported that London’s Cleave and Company (who are the jewelers of Queen Elizabeth) made both Markle’s engagement ring and her husband’s, Prince Harry’s. The couple broke royal tradition when Markle gave the prince a platinum wedding band with a textured finish during the ceremony as opposed to a band made from the royal stash of Welsh gold. The royal family has used gold ever since the Queen Mother’s wedding in 1923.

People magazine reported that Markle also wore on her wedding day a simple diamond bracelet, also by Cartier. As far as her stunning engagement ring, it is made up of three diamonds, with one large stone in the center surrounded by two smaller stones on the sides. The two stones on the sides are from Princess Diana‘s personal collection while the other stone is from Botswana, a country that has sentimental value to both Prince Harry and his now wife. The prince has often spoken about his love of Africa, saying it’s the place where he feels more like himself than anywhere else in the world, and while dating Meghan he invited her to accompany him on a trip to the continent, which included a visit to Botswana.

What About the Royal Princesses Before Meghan Markle?

Markle’s sister-in-law, the Duchess of Cambridge Kate Middleton, married Prince William in 2011. For her big day, she wore  the Cartier Halo tiara that was passed down from Queen Elizabeth II and a $20,000 custom-made Robinson Pelham chandelier diamond earrings. The earrings were reportedly commissioned by Kate’s parents, Carole and Michael Middleton, according to People magazine. In 1981, for her own wedding day, Princess Diana — Prince William and Prince Harry’s late mother — wore the Cambridge Lovers’ Knot Tiara, according to Marie Claire. The tiara was passed down from Queen Elizabeth II. Princess Diana also wore pear-shaped earrings owned by her mother but opted to not wear a necklace or bracelet.

The central part of Princess Diana’s wedding tiara was given as a wedding present to Lady Cynthia Hamilton, Diana’s grandmother, when she married Albert, Viscount Althorp, the future 7th Earl Spencer, in 1919, People reported. The topper was given to Cynthia by Albert’s great aunt, Lady Sarah Isabella Spencer. The ends of the tiara are said to have come from a sparkler once belonging to Frances Manby, the last known Viscountess of Montagu.