June’s Birthstone Facts and Details About What Pearls Symbolize

Bring on the pearls!

If you don’t already know, pearls are the official birthstone of June, and we could not be more thrilled about it. Pearls, both natural and cultured, are one of the most popular gems in the world and for good reason! They’re timeless, elegant, can be dressed up or down, and honestly, everyone looks good in pearls (in one way or another).

Pearls have have an interesting meaning and history that dates back to 2206 BC!

First off, many don’t know that pearls come in a variety of colors, though the most popular and familiar ones are white and cream. Other colors include black, gray, yellow, orange, pink, lavender, green and blue, but the range of pearl colors extends to every hue really.

While gemstones form as minerals underground, pearls are organic and form within various species of freshwater and saltwater mollusks. The Gemological Institute of America (GIA) explained that natural pearls form in the bodies of certain mollusks and without any human help, while cultured pearls are the result of human involvement and the artificial insertion of a bead or piece of mantle tissue into the mollusk, which gets the process started. The species secrete a substance called nacre, which consists of calcium carbonate and protein. This nacre, as time goes on, grows layer by layer into a pearl.

The first written mention of a natural pearl was by a Chinese historian, who wrote about them in 2206 BC. The first attempts to culture pearls took place hundreds of years ago in China, but a Japanese man named Kokichi Mikimoto successfully cultured the first pearl in Japan in 1893. Mikimoto became famous and credited with creating the first cultured pearl, and started the cultured pearl industry with the establishment of his luxury pearl company, Mikimoto, which is still around today. 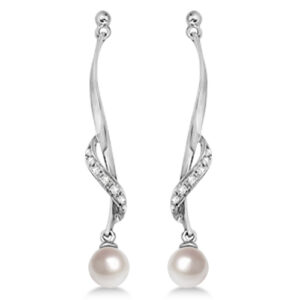 Soft white orbs, more commonly found among saltwater pearls, have become an “idealized standard,” according to the International Gem Society (IGS).  Many cultures have made lunar associations with pearls, since its shape is so similar to the Moon, and these associations are further reinforced by the Moon’s association to water, where pearls come from.

IGS explained the symbolism as such:

In ancient Vedic texts, the pearl is born of the Earth’s waters and the heaven’s powers, fertilized by a flash of lightning. It’s considered to be the daughter of the Moon. In Western cultures, the pearl has astrological associations with the planet Venus. Like pearls, the goddess of love came from the sea. Some also believe that pearls are tears shed by the gods and another legend claims that the tears Eve cried when she was banished from the Garden of Eden turned into pearls.

In ancient China, pearls were believed to protect it’s owners from fire and fire-breathing dragons. IGS noted that the Chinese love golden pearls specifically because they believe it brings wealth and luck. Chinese artwork often includes dragons holding golden pearls in their mouths or claws.

In Europe, pearls symbolized modesty, chastity and purity. In ancient times, kings wore ropes of pearls as a mark of wealth. According to Polynesian lore, the god Lono came down on a rainbow to see a princess, carrying black pearls with him as gifts and they were imbued with the colors of the rainbow.

Western cultures still associate the color white with innocence and purity. For that reason, many times white pearls are given as a wedding gift from the groom to the bride, or from the bride’s parents to her, in the form of pearl earrings, a pearl necklace or pearl bracelets.

IGS also explained that there is a myth about pearls being unlucky: “The violence associated with removing pearls from their natural abode (living creatures) has given them a reputation as unlucky…Any pearl jewelry with malice or jealousy in its past builds a reputation for bringing bad luck to those sharing the same traits. If given in love with a pure heart, a pearl always symbolizes purity, fertility, and the cycles of life.” 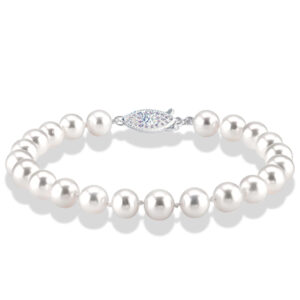 Natural pearls are extremely rare to find nowadays, which of course increases their value. In ancient times, the expense of finding perfect pearls fueled beliefs about pearls being associated with wealth. The idea was that a caster would select a fine pearl, infuse it with the desire for riches, and then throw it away, according to IGS. Th notion behind this  practice was that someone who could throw away pearls was rich indeed.

The rarity and expense of good pearls also contributed to some common expressions we still use today, for example calling good advice and counsel “pearls of wisdom.” The saying means that when wisdom is given, treasure it like a rare pearl.