July Birthstone: Ruby Jewelry, Its Meaning and What It Symbolizes 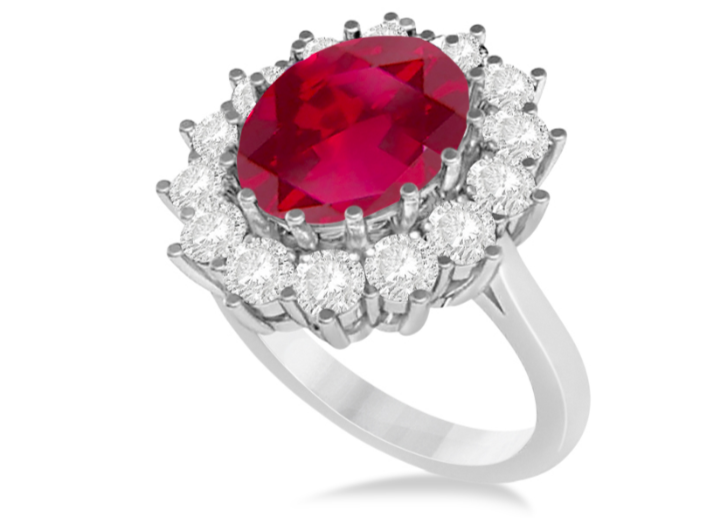 July’s birthstone is a ruby, and Allurez all the beautiful ruby jewelry and information you need about the gemstone.

Aside from being the birthstone of July, it is also the gem for the 15th and 40th anniversaries. It is made from the mineral corundum and in its purest form, corundum is colorless, according to the Gemological Institute of America (GIA). However trace elements that become part of the mineral’s crystal structure cause variations in its color and chromium is the trace element that causes a ruby’s red color. Ruby is the most valuable variety of the corundum mineral species, which also includes sapphire.

The strength of ruby’s red depends on how much chromium is present (the more chromium, the stronger the red color). Chromium can also cause fluorescence, which adds to the intensity of the ruby’s red color.

On the Mohs Hardness scale a ruby is a 9.

The most renowned rubies, like those from Myanmar, the Himalayas, and northern Vietnam, typically form in marble, according to GIA. Marble has a low iron content so the rubies that form in marble lack iron and because of this, many have an intense red color. Rubies can also be found in basalt rocks in some locations and rubies from these sources can have higher iron content, which can make the rubies darker and less intense in color.

Mogok is Myanmar’s legendary valley of rubies, according to GIA, and it is the source of many of the world’s most amazing gemstones. In 2003, the US banned the import of rubies from Myanmar and it wasn’t lifted till 2016. Rubies have been mined predominately in Myanmar and Thailand for centuries, but formalized mining for rubies are now taking place in East Africa, which has been a well-known source for rubies and sapphires since rubies were discovered near Longido in Tanzania in the early 20th century.

All the rave now is about the rubies from Mozambique, located in southeastern Africa along the Indian Ocean. Mozambique has the world’s largest ruby deposits, according to GIA. Its total area is 801,590 square kilometers, about twice the size of California, and the climate is mostly tropical. By 2010, rubies from Mozambique already dominated the Thai market. 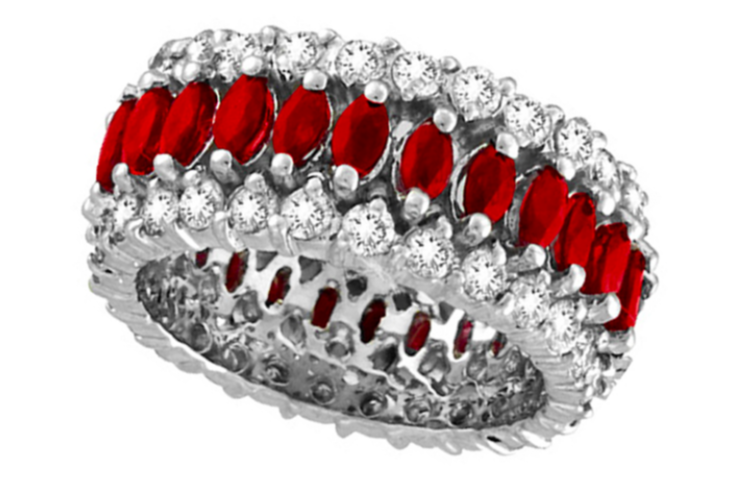 Rubies can command the highest per-carat price of any colored stone, according to GIA. CNN reported that a red ruby sells for more at auction per carat than a white diamond. It’s price per-carat have been constantly rising and many times breaking auction records. The per-carat price can also increase with size and for a vibrant colored ruby that has no visible inclusions, the price goes up even more.

Color is the most significant factor affecting a ruby’s value, GIA explained. Expensive gems are a pure, vibrant red to slightly purplish red. As the color takes more of an orange or more of a purplish hue, the ruby goes down in terms of quality and price. If the color is too dark, that can also has a negative effect on the stone’s brightness and on the other hand, if the color is too light, the stone can be considered a pink sapphire.

In terms of clarity, it depends how visible a ruby’s inclusions are to the eye. If the inclusions affect its transparency or brilliance, the stone’s value drops significantly. Fine-quality rubies over one carat are very rare and the price goes up as size increases, like with most gemstones. People in the jewelry industry expect rubies to have at least some inclusions because inclusion-free rubies are basically nonexistent. It’s important to keep in mind that inclusions can also limit a ruby’s durability.

GIA noted that the most common shapes of fashioned rubies are “ovals and cushions, with brilliant-cut crowns of kite-shaped and triangular facets, and step-cut pavilions with concentric rows of rectangular or square facets. Round, triangular, emerald-cut, pear, and marquise rubies are also available. But these shapes are rare in larger sizes and higher qualities.” 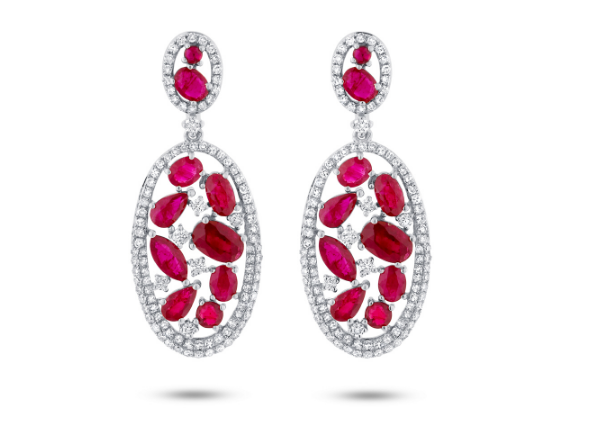 The name ruby comes from the Latin word ruber, which means “red.” Ruby has been called the most precious of the 12 stones created by God. In the ancient language of Sanskrit, ruby is “ratnaraj,” meaning the king of precious stones.

Rubies remain one of the most sought-after gems for royalty and the upper classes. It has been long associated with royalty and many medieval Europeans wore rubies to guarantee health, protection, wealth, wisdom, and success in love.

There are many beliefs about rubies. Early cultures held rubies in high regard because of their similarity to the redness of the blood, and believed that rubies held the power of life. Ancient Hindus believed that those who offered fine rubies to the god Krishna were granted rebirth as emperors. People in India believed that those who owned rubies were enabled to live in peace with their enemies. In Burma — which has been a a ruby source since at least 600 AD, now called Myanmar — warriors had rubies to make them indestructible in battle.

Some famous rubies in history include the 250-carat ruby that adorned the crown of Charles IV of Luxembourg in the 1300s, and Queen Elizabeth II has the modern Burmese ruby tiara in her jewelry vault. 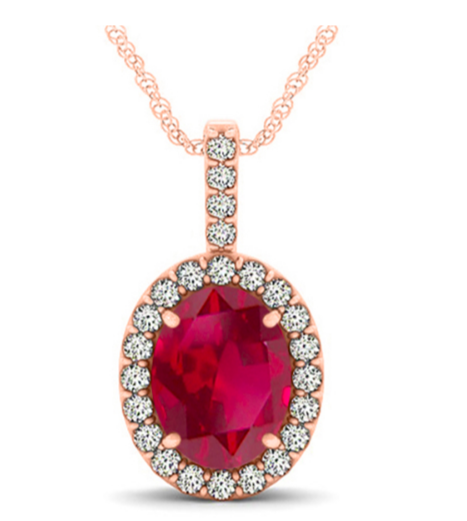 There is a new trend for color, and all the experts are saying so. Traditionally people would chose diamonds for their jewelry, but people are becoming more adventurous and interested in having something a bit different: a pop of color. Retail sales in the colored gemstone industry are now worth an estimated $18-21 billion, according to CNN.

A jewelry historian and journalist told CNN in April 2018 that the huge interest in colored stones recently has been “phenomenal.” She told the publication, “Diamonds, I feel, how become somewhat commoditized with the transparency of the Internet [and] everyone being able to research prices. Diamonds are much more classified. But when it comes to colored stones then there’s a quesiton of taste, expertise and assessment.  Of course the other reason is that very fine colored stones are incredibly rare. Probably far rarer than diamonds.”

Jewelry dripping with rubies and other colored gemstones are constantly seen on the runway during Fashion Week and was most recently spotted at Paris Haute Couture Week in early July. And as a fun ode to commemorate the 50th anniversary of “The Wizard of Oz,” Harry Winston created real ruby slippers set with 4,600 rubies.

Many people choose unique gemstones for their rings and some decide on ruby engagement rings because of the red color, which symbolizes love. Actress Eva Longoria, from the former TV series “Desperate Housewives” and numerous films, who married José Antonio Bastón in 2016, opted for a round ruby engagement ring surrounded by diamonds.

Singer and actress Jessica Simpson became engaged to her now-husband Eric Johnson in 2010 and Johnson chose a romantic, 5-carat gold ring to propose with that included an oversized ruby in the center embellished by two pear-shaped diamonds on either side.The custom ring includes smaller diamonds that encircle the band all the way around. The choice of a ruby holds special significant to the couple because the ruby is Jessica’s birthstone, and also the ruby is the stone that symbolizes love. Simpson’s sister, singer Ashlee Simpson, also went for a ruby and diamond encrusted engagement ring when she got engaged to actor Evan Ross.

It’s also hard to talk about ruby engagement rings without bringing up fashion designer and Spice Girls group member Victoria Beckham, who has a 14 engagement rings. Yes, we you read that correctly, we said 14. Beckham has been married to soccer star David Beckham for 19 years and over the course of their marriage he has gifted his wife with 14 different engagement rings to show his love for her, according to Harper’s Bazaar. In 2009, she began sporting an oval-cut ruby ring mounted in a white-diamond setting.

Those are only some of the “famous” ruby rings made popular by celebrities. Many also opt for ruby earrings, ruby bracelets, ruby necklaces and more.