Diamond Cutting: Old Mine Cut VS European Cut and Other Styles 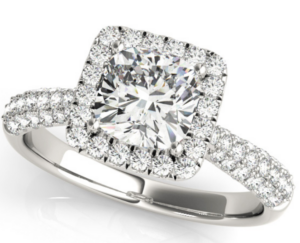 Some might argue that the most important of the 4 C’s (cut, clarity, color and carat) is the cut, because it has the greatest influence on a diamond’s sparkle. But there are a few styles to consider when it comes to picking the cut of a diamond.

Diamond cutting has changed over time. According to GIA, from the early 18th century to the late 19th century, the old mine cut was perhaps the most common diamond cut. It’s the cut you’ll most often find in Georgian (1714-1837) and Victorian era (1837-1901) jewelry. An old mine cut diamond brings back the past methods of measuring diamonds by eye and cutting by hand, (no machinery was available at the time for cutting) so this diamond cut is the way to go if you’re looking for a diamond engagement ring or any kind of jewelry with “antique or vintage qualities,” according to GIA.

An old mine cut diamond is identifiable by its squarish shape. It has 58 facets, just like a modern round brilliant cut diamond found today. In terms if diamond proportions, an old mine cut typically has a smaller table, larger culet, higher crown, short lower half facets and a girdle that is very thin in some places. Because of all of these factors, an old mine cut diamond has a very distinctive look, making your piece of jewelry unique if you decide to go with this cut.

Diamond cutters (also called bruters) back in the day shaped old mine cut diamonds by following the octahedral shape of the diamond crystal itself. They grinded two diamonds together to get the shape they wanted and then a diamond polisher would polish the facets. Because of the shape of the rough diamond and because the diamonds were hand crafted, dimensions varied “from stone to stone,” according to GIA. This made every old mine cut diamond unique.

With the invention of the bruting machine in 1874, cutters were given the opportunity to be more in control and precise with the diamond cutting process,. Cutters were also able to give diamonds a more perfect round shape and they also modified the proportions to create greater sparkle on the diamond.

In 1902, the Royal Asscher Diamond Company invented the Asscher cut. This diamond is reportedly one of the very first patented diamond cuts in the world. Classic asscher cut diamonds are cut into squares and resemble emerald cuts, which are rectangular. The corners are cropped which give the shape an octagonal appearance. Asscher cut diamonds have large step facets, a high crown, and a small table.