What Is Egyptian Cartouche Jewelry and What Does It Represent? 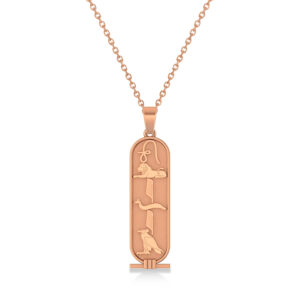 Maybe you’ve never heard of it or maybe you’re already a fan. Regardless, Egyptian cartouche jewelry has a rich history and symbolism that is worth talking about when it comes because many are attracted to its unique style and what it represents.

An Egyptian cartouche is an ancient name plate that features Egyptian hieroglyphic writing (hieroglyphics are pictorial symbols that represent the images and sounds of their language). It’s a vertical oval or oblong bar, and the name and title of a king, pharaoh or royal was written in the center in hieroglyphics. They could also be horizontal, if more space is needed for letters. The oval signified a rope and the horizontal line symbolized the rope being tied together at the bottom, to form a loop. Egyptians believed that the rope circle represented everything encompassed by the sun, which symbolized the king’s power over the universe.

Cartouche jewelry appears in many forms, such as the rings, pendants and earrings. Pharaohs would sometimes wear a cartouche to help ward off evil spirits and bring good luck, and it remains a symbol of that until today. 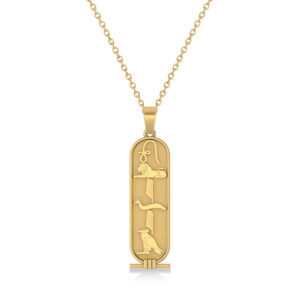 The word cartouche is the French word for a gun cartridge or bullet. When Napoleon took his army on an expedition to Egypt, the soldiers repeatedly commented on how the shape of the name plate looked like a gun cartridge. The word became so commonly used that it has remained the standard name.

Though Huni, the last king of the 3rd Dynasty, was the first Egyptian pharaoh to enclose his throne name in a cartouche, by the 5th Dynasty, both the king’s throne name and birth name were written within cartouches. They were the most important titles among royals at the time.

When a person died, the cartouche was attached to tombs and coffins to mark who was inside and help protect the person from evil spirits in the afterlife. The ancient Egyptians believed that each person had two souls, the Ba and Ka, and when a person dies, the Ba goes to a place to enjoy life and the Ka goes to protect the person’s family and friends. At the end of each night, the Ba and Ka come together to meet the mummy. If they cannot find the body, which the cartouche helps them identify, then the person is never able to go to the afterlife and they will just disappear forever.

In the tomb of Tuthmosis III, in the Valley of the Kings, the entire burial chamber as well as the sarcophagus was constructed in the form of a cartouche. Most recently, archeologists found artifacts that bear the seal of Amenhotep III’s cartouche. He was one of Egypt’s most powerful pharaohs.

While the oval and line may be the same in each cartouche, each name plate has a different inscription. Each piece of cartouche, jewelry is unique for that same reason. In excavations, the cartouche allows archaeologists to identify whose tomb, statue, icon, or other artifact they are looking at. A cartouche may also appear in Egyptian texts, and can be helpful in understanding which pharaoh wrote the text or is being discussed in the wording. 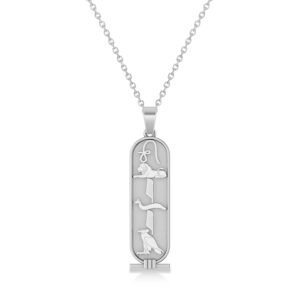